It is with great sadness that I heard of the passing of Ko Murobushi, a great teacher, a fellow wanderer, someone who really lived, experienced, questioned, and danced…with many of us. I am re-blogging a series of conversations that I had with him over the course of the last two years 2013-2014, in various cafés around Takadanobaba, dance events, bars, his small apartment. We laughed, we drank, we misunderstood each other at times. And then we went to Yamagata, the last trip I made before I left Japan in 2014. He was returning to Yudono-san, the sacred mountain of spiritual rebirth part of the Dewa Sanzan. As we sat at the shrine, Ko, Kimiko, Arihiro (Yamada) and myself, with our feet dipping in the warm water, Ko told us that the last time he had been there was at the start of his journey, of his wandering… 47 years before when he experienced the Yamabushi life for a time. Perhaps he has returned there once again…   read more >>

This interview is no longer available online

In the last three years, I interviewed a number of artists and dancers directly or indirectly linked to Butoh. I have published most of these conversations on this blog  at some point so as to share these exchanges publicly.

Today I am publishing a conversation I had with Yukio Waguri, one of the main dancers working with Tatsumi Hijikata in the 1970s. Waguri continues to teach, dance and discuss his experiences of this important time in the choreographic development of Butoh.

In this interview we discuss in great depth the development of Butoh-Fu by Hijikata as well as considering the implications of a choreographic system.

This conversation was facilitated by the Hijikata Archive at the Art Centre, Keio University. I wish to sincerely thank Mr Takashi Morishita for organising this interview and offering the meeting room and especially a very sincere thank you to Yu Homma who was present through out the conversation and provided an excellent translation of the more complex aspects of this interview.

After many months of talking, transcribing, correcting, editing, I have finally got a manageable shorter version of the outcome of many conversations with Ko Murobushi which took place between December 2013 and October 2014. As part of my series of interviews with Butoh-related artists, this opens up the topic onto Ko’s original take on his practice, one that has defined him primarily as a ‘wanderer’ and one who questions and renews his approach through the act of wandering. 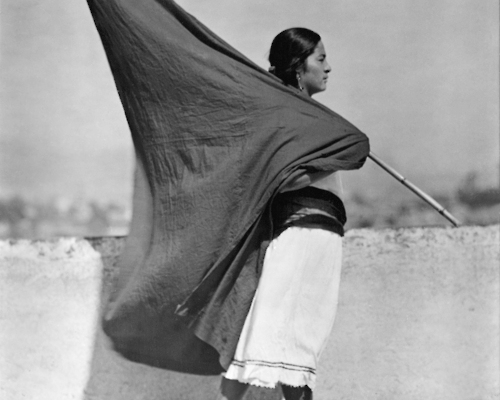 Kazimir Malevich at Tate, preparing a walk and thinking about darkness and horizons

“The contemporary is he who firmly holds his gaze on his own time so as to perceive not its light but rather its darkness.” Giorgio Agamben, ‘What is the Contemporary’

The Malevich retrospective just ended at Tate Modern. I managed to get it just in time, just off the plane from Tokyo, passing through London on my way to the next Black Walk and the first one of 2014, Black March Berlin.

I was thrown back to where it began. A circularity of sorts that took me to Japan, where I indirectly felt the influence of Malevich’s ‘Black Square’ on Tomoyoshi Murayama’s MAVO movement in 1920s Japan. Murayama had been inspired by his experience of the avant-garde movement whilst in Berlin for a one-year stay and brought the movement home to Japan as MAVO. The MAVO movement’s own performance art and dance happenings preceded Butoh in the Japanese modern dance scene and probably create a further line of spiraling circularity in terms of influences: Malevich, Murayama, Hijikata… read article >>

I will be teaching some classes through Butoh UK on 28 October and 4 November at the Buddhist Arts Centre in Bethnal Green.

My teaching is based on my own experiences with a variety of Butoh dancers in Japan over the past 3 years where I have done a self-directed research project into the origins of Butoh and the contemporary currents of this form. To this I have applied my previous dance and movement training to create an amalgam approach for creating with the body, I call it ‘body material’ in tribute to Tatsumi Hijikata.

Working from the principle of the body as a material with properties of weight, density, resistance which are constantly changing and transforming, my focus is on developing new perceptions on live presence within space and time.

* Some experience of movement or dance training is advisable and please read the disclaimer on the ButohUK website.

“…the expansion of presents towards the past and the future, their coexistence, indexes the possibility for an ethical remembering necessary for a politics of the dead…” André Lepecki 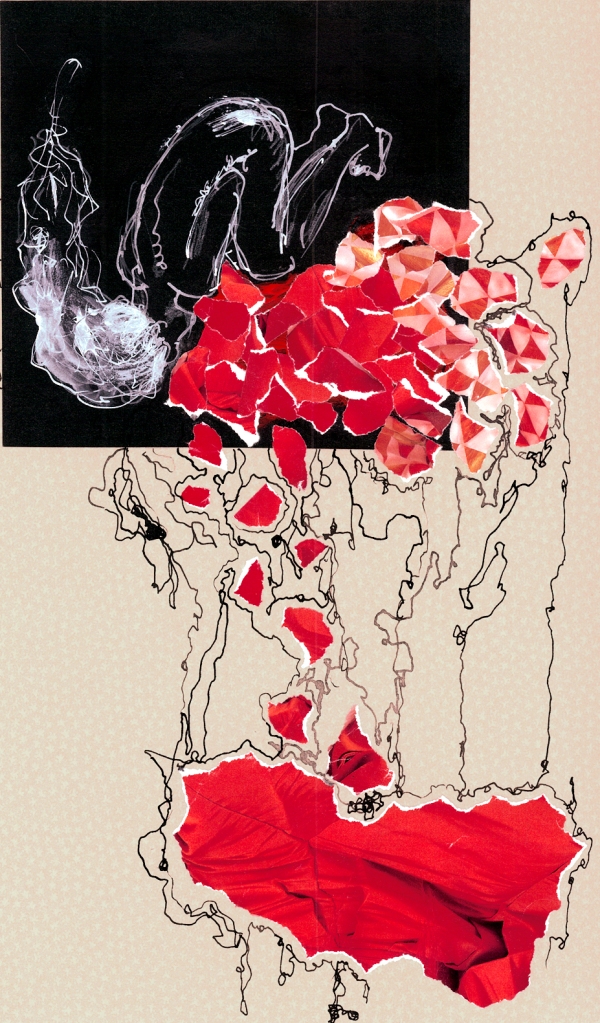 ‘Homework of the blood’ might sound like a strange title for a performance event, and of course it is. It was chosen through an episode of a ‘loss in translation’: I misunderstood the use of a word in Japanese and thought this title was being suggested… This ‘loss’ of understanding which we experience within language and between languages, also applies to time. The ‘loss’ associated with memory and time can be termed ‘melancholia’. This is how Lepecki refers to it in his book ‘Exhausting Dance: Performance and the Politics of Movement’. In his conclusion he advocates taking a different perspective on time in order to rid ourselves of the melancholy of modernity which only believes in units of the present which become lost as they disappear into this ‘micro’ view of time. And for language, in the case of this title, by opening up the possibility of a mistake actually ‘becoming’ a possible result.

What is ‘The Homework of [our] Blood’? In my performance I am seeking to address a homework concerned with gender, in my case that of the ‘woman’. Part of the homework I do within the female body I have is question what it is to be ‘woman’, and how this relates to being ‘feminine’? Ideas about the ‘essence’ of woman, the standards of ‘beauty’ or ‘ideal’ might change across eras and cultures, but some seem to remain rigid and handed down from previous generations without question.

I will rework a performance which I created last year for the Festival of Female Dancers at the Isamu Noguchi Room, Keio University. I called this performance ‘The Shape of Twilight’: within the time of twilight, forms change, things may appear differently as light changes to darkness. In that twilight is the possibility of re-imagining fixed form, just as the twilight of misunderstanding does in language, and perhaps in that space we can see new possibilities for what ‘woman’ is, which go beyond the melancholic memories of “feminine  = woman”.

Again I will collaborate with innovative sound artist Fujita Yosuke  >>

Or scroll for English flyer

These lines from Sans Soleil resonated in my mind since the first time I saw this film: now a film I have watched many times and one of my favourites. In fact I can say that it was that film that perhaps brought me to Japan or brought Japan to my attention. The sight of the ‘Sleepers’ on the trains, the museum of mating animals in Hokkaido, the hypnotic movement of the Bon-dancers.

WHITE began with a brain scan. Photos of my head were taken because I had a problem with my vision: 365 photos in total, a number that echoes the days of a year, each fragment of a whole that makes up an element of time, of my life. I was told I might have a condition that would affect my nerves, something wrong with the WHITE matter: all this was communicated through translation. The last part was the wound.

When I was creating WHITE I was thinking about the difficulties I have had in communicating: difficulties that were not always sad or alienating ones. Instead this separation gave me the freedom to be an observer, an outsider, ‘a fly on the wall’ and I could reflect on what words attempt to do. How thoughts and words are connected to the time of our own bodies, our social bodies and the time of others. I always seem to be out of time, in my lack of words, but I am always punctual although I don’t even have that essential of modern communication, a mobile telephone.

Of course in the solitude of the studio and faced with the prospect of one’s own mortality, Love becomes a frequent point of return for the meandering mind.

WHITE actually began with a dream of a dead polar bear with a deep wound on its back.

Natsu Nakajima will be presenting ‘Solo Butoh Exhibition’ through the Yotsuya Butoh Network on 5 & 6 September 2014.

I will be participating alongside four other female dancers: Akiko Otsu, Ayako Omori, Biyo Kikuchi, Tomomi Tanabe. I will present a new piece ‘WHITE wound’ which is currently in development and in September, wanting to be faithful to my third year’s experience of Japan, I will show a work-in-progress extract of it as my solo. I’ll be posting up a little more information on this piece as it develops.

Details for the event:

Please email me  if you’d like to buy an advance ticket:    dominique.bonarjee[at]gmail.com 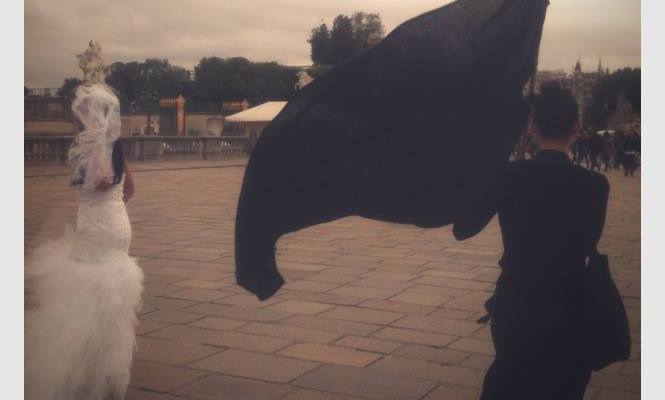 Last year on 22 June 2013 I walked a spiral through Paris following the descending numbers of the arrondissements from 20-1 and then eventually to Point Zero where all distances are measured from. I was accompanied by 14 participants, most of them strangers. They had responded to a call out from Dimanche Rouge, performance art organisation, or 59 Rivoli Gallery.

The walk in Paris was inspired by the landscape mandalas of the Kii Peninsula in Japan, whereby walkers follow an ancient trail which traces a mandala over the landscape as a practice towards ‘satori’ enlightenment. In Paris I was questioning and attempting ‘an encounter with the sacred in the urban landscape’.

The walk began at 8am from Porte de Bagnolet, me and my big black flag, about to start the longest Black Walk yet: unbeknown to me then, I was embarking on a 50 km walk that would last 13 hours: I may conceptualise but I do not measure.

I met my first participant just before the entrance to the Cimetière du Père Lachaise. Of course each of these meetings was ostensibly a ‘blind date’: I had no idea who these strangers would be. Rafaële appeared from the anonymity of the street and silently entered my step . Moving in complicit unison, we entered the cemetery and ‘danced’ a walking duet as we got lost amongst the gravestones.

13 hours and many ‘blind dates’ later I found Point Zero in front of Notre Dame Cathedral. I was accompanied by five of my partners, a brave band of participant-collaborator-conspirators who had crossed the city with me one by one. It was in them that I found the sacred in the city: in the silence, the steps, the rhythms, the burning questions, the conversations, the shared encounters, the intimacy of strangers, the trust in a project that simply set out to walk for hours with no specific slogan, no aim, no message. Just bodies moving, sensing the city, travelling, both provocative and invisible.

When I waved the black flag at Point Zero Paris it was not of conquest but of continuity. I’ll be taking Black Walk to India next year.

Thank you to each of these participants who walked and shared their experience through drawings, writings, films, photographs, memories and to a later contributor Rich NXT for sound composition:

With the support of:
Dimanche Rouge
59 Rivoli Gallery