In February 2018 I visited Japan for a whirlwind tour of only ten days. This research trip was part funded by a Research Support Grant from Goldsmith’s University as part of my PhD.  I was able to indulge my interest in a conversation around AI with Sasha Drozd at Tokyo Institute of Technology and then bring this inspiration to my collaboration with artist and sculptor Kyoko Fujiwara.

Another artist and colleague from the Nakanojo Biennale group, Kaoru Murakami was there to see The Invisible Realm: a Path to Arcadia, the performance which gathered ‘the fruit of our labour’. After the performance she commented that my movement quality seemed very different from what she’d seen before. Her short review is really fascinating where she mentions being reminded of a recent NHK programme around AI-created animation and movement. Read it below.

The performance was shown within Kyoko Fujiwara’s solo exhibition at the Iwasaki Museum on 9 February 2018. Sound design was by Joel Cahen/Newtoy and all photos by K. Hayashi. 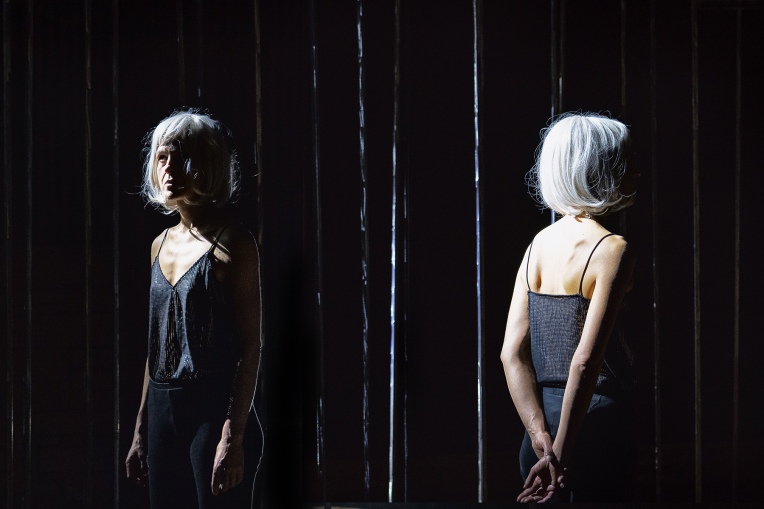 Review of The Invisible Realm: a Path to Arcadia

While Dominique was performing, her hand was shaking like an old robot or a badly made 3D animation. She looked like a sick old woman too: but she wasn’t. That’s because she didn’t show any emotion on her face. I wasn’t able to see any feelings in her, moreover, she didn’t seem to have any age. I felt her movement was unnatural. It looked like a character in a video game, which was forced to move by someone.

As I watched, I was remembering the words spoken by Hayao Miyazaki, the director of Studio Ghibli about movement that was created by Artificial Intelligence. He said the AI movement is ‘an insult to life itself’. This AI has learned certain movements and it can choose how to use the body. However, AI doesn’t feel any pain so it creates very creepy movement.

[link to Miyazaki interview on NHK]

As Dominique performed, there seemed to be this Zombie-like movement that is completely free from human disadvantage. It is free from muscle pain, from ill-health and from the existence of internal organs. This creature only has a single intention, to move as a super strong and healthy body. I felt a dark impression about our own ethics while looking at her performance. We can be cruel to somebody like Super Mario who doesn’t feel pain. Humans are now trying to entrust something to AI, but if this AI could come to naturally control things, the time might come when AI had a higher sense of ethics than human beings. I was thinking how we, once we have lost human dignity, might be at that time?